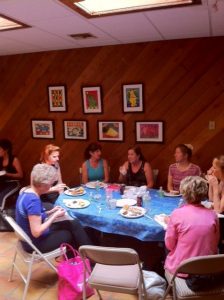 by Charlotte Siems
NOTE:  T-Tapp will be featured in a documentary for Public Television fund drives beginning in May, 2011.  I was selected by PBS to be interviewed and participate in the filming of the show.  I thought you’d enjoy a behind-the-scenes look at the weekend in Ft. Lauderdale, Florida:
The alarm was set for 6:30 Florida time (5:30 to us Okies), and we showered and fussed over our hair and makeup for the big day at the Public Broadcasting studio.  A bus came to the hotel to pick up the group and everyone got acquainted and chatted on the short drive to the studio.  Upon our arrival, we were greeted by staff and led to a room where fruit, croissants and the rest of the breakfast spread was laid out.  Chairs were brought in until we had enough seats for everyone so we could “hurry up and wait.”  One by one, interviewees were taken to the makeup artist for touchups, where I learned that at my age I shouldn’t wear frosted eye shadow.  Note to self:  visit the Mac counter next trip to Oklahoma City.
After makeup, we were taken into one of two interview rooms, while another person waited in line on The Chair in the Hall, sort of like being on deck to be next at bat.  Our own Lisa Moretti interviewed some of the T-Tappers, and the lovely Maia (Maya?) interviewed the rest.  The interviews took place in rooms the size of small bedrooms with various backgrounds.  We were supposed to keep our eyes on the interviewer but I accidentally glanced at the camera guy a couple of times because I didn’t want him to feel left out.  They asked us questions, and we answered by including the question in our answer.  Almost everybody I talked to thought of something they wished they had said in their interview, but the PBS staff were blown away by the confidence and passion of the T-Tappers they interviewed.  I actually got emotional during my interview and the staff got choked up, too!
After the interviews were finished at noon it was time for lunch.  The studio staff brought in a Floridian lunch of glazed chicken, black beans and rice, salad and plantains.  The ladies set everything up beautifully and served us with grace.  When lunch was finished….more waiting.  Right before we went in to the bigger filming room, a couple of T-Tapp Trainers warmed us up with part of Primary Back Stretch: 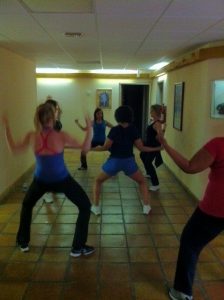 The “big” filming room was smaller than you would expect.  There was a nice stage and background set up, and a few minutes were spent arranging us by height, hair color, age and clothing color.  I ended up on the back row in the corner, which was great with me.  Teresa Tapp led us in several T-Tapp moves, with water breaks between each.  The last move was ten sets of Hoe Downs while the camera men weaved through the crowd getting close-up shots.
Then it was time for us to sit in chairs in the audience to listen to Mary Shomon discuss hormone health.  She nailed her talk and even though I’d heard her speak before, it was truly fascinating.  At the end the crew wanted a close-up shot of someone feeling their neck for their thyroid gland, and my neck was chosen since it’s long.  Note to self:  should have gotten a manicure.  Oh well, it was fun and my neck may end up on national television.
The last segment we filmed was another audience shot of listening to Teresa’s presentation.  There was only one small segment that had to have a second take, and that was because the audio didn’t pick up a certain word.  When Teresa re-did that little section she did an even better job so it was all good.
The atmosphere of the whole day was very special–peaceful, friendly, excited–all things positive.  We actually finished earlier than planned and the bus arrived at 6:00 to take us back to the hotel.  We hit the showers and then attended a cast party with dinner at the hotel in a meeting room and lots of laughter and visiting.  The president of the studio sat at our table and he was funny and charming.  It was an extra special treat that the producers and owners decided to attend the cast party.  It was a wonderful ending to a great day.
The next morning we did a workout with Teresa for more than three hours.  We learned some Senior Fit and even better, Boomer Fit moves, with plenty of time for questions for Teresa.  T-Tapp Hula Twist anyone? 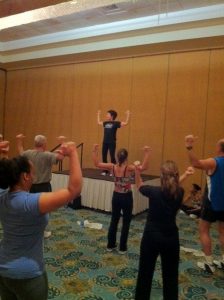 When we learned that the hotel restaurant was closing in ten minutes (it was nearly 2:00), we ran back up to the workout room to tell everyone to hurry.  About 15 of us gathered there for lunch and we ended up sitting there for three hours!  We finally left when the hotel staff began setting up for dinner.   They day ended with a shower and pajamas by 6:30 p.m., room service pizza and bed at 8:00. 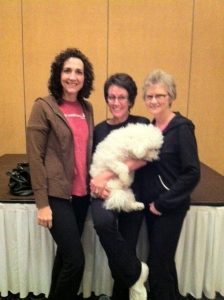