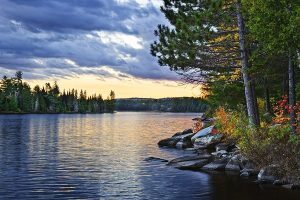 A Change of Seasons:  Adjusting to Changes in Family Life

Seasons change.  Just as surely as summer is followed by autumn, the seasons of family life shift and the landscape changes.  Whether it’s a new baby or a new school year, change is unavoidable.  It requires us to adjust and absorb a new routine.

Dreading change and fighting its arrival doesn’t change….anything.  It only makes it harder for us to move forward.

I heard a story about a group of teen boys who decided to swim across a lake.  They considered themselves athletes and boasted that they could easily swim the distance.  Eagerly diving into the water, they began to swim with all their might.

It wasn’t long before they were tired and panic set in.  The young men decided to turn back to shore but when they looked back they realized, to their horror, that they were farther from the beginning point than they were to their destination.  They had no choice but to keep swimming and try to make it.

The boys splashed and swam as best they could.  Their hearts failed as they saw how far they had to go.  They regretted their hasty decision and labored to stay afloat.  And then one of them discovered that he could touch bottom.

It turned out that the lake was four feet deep.  All the way across.

All they had to do was stand.

Isn’t it like that with change?  We get in the middle of change and feel trapped.  We wish we could go back to the way things were.  Or we wish we didn’t have to move forward.  We feel swept away by circumstances, not sure that we can make it any further.

We dread the new school year and worry about how we’ll get it all done.  Then the school year starts and we get into a routine and it works out.

It turns out that the lake was four feet deep.  All we had to do was stand.

Go with the change of seasons.  Save yourself the trouble of worrying and resisting.  Stand….and do the next thing. You’ll find that it wasn’t as deep and scary as you thought.