Chicken Fried Steak Fingers and Homemade Cream Gravy
by Charlotte Siems
We recently had a special Sunday meal and in preparation, I cooked Chicken Fried Steak Fingers on Saturday evening.  I knew there was no way I was coming home from church on Sunday and spending an hour cooking the meat.  Besides, we love the taste and crispiness of reheated steak fingers.
When we got home from church, the kids went out to the garden and picked our first crop of corn. 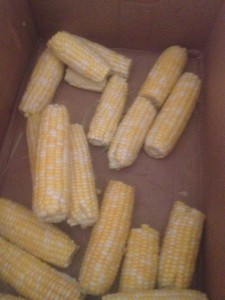 Meanwhile, I started the water boiling, popped the meat in the oven to reheat and sliced red potatoes from the garden to make homemade mashed potatoes.  Then I used leftover oil and crumbs from the meat cooking the day before to make cream gravy.
Cutting the steak into strips and breading the strips stretches the meat.  Instead of mushy crust and soggy meat in the middle, the whole strip is crispy and the meat is fully cooked.
This recipe is a rare treat at our house for two reasons:  we don’t eat many fried foods and it’s a mess to cook.
Here’s an inexact recipe.  I’ve never measured the ingredients so I’ll give you ballpark amounts.
Chicken Fried Steak Fingers
2 to 2 ½ pounds tenderized round steak
4 eggs
1 to 2 cups milk
3 to 4 cups flour
salt
pepper
oil (enough to fill a skillet at least 2”)
Heat oil in a skillet over medium high heat.  Cut the round steak into strips with scissors and salt the strips.  Lightly beat the eggs and milk in a mixing bowl.  Mix flour, salt and pepper in a shallow pan, such as a 9 x 9 glass casserole dish.
Set up an assembly line:  egg/milk, flour mixture, hot oil in skillet. 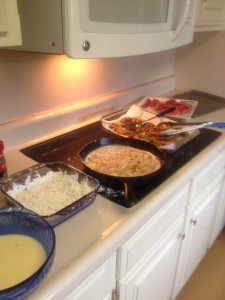 Dip a meat stick in the egg/milk, completely covering it.  Then dredge in flour mixture and put in hot oil.  Turn with tongs until cooked golden brown on all sides.  Remove to a paper-towel covered plate or dish. 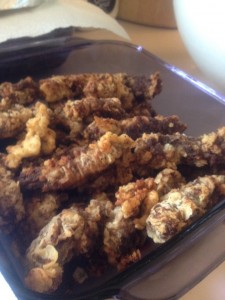 Scrape the dough from your fingers into the hot oil and you’ll make delicious crumbs.  Keep stirring the oil as you cook and between batches so you don’t end up with burned crumbs on the bottom.
Homemade Cream Gravy
5-6 tablespoons leftover oil and crumbs from cooking steak fingers
flour
salt
pepper
milk
Place oil and scrapings from the pan in a skillet and turn on medium heat.  Add 3-4 tablespoons flour and stir with a slotted spoon until smooth.  It will bubble and thicken.  Add milk to skillet, probably about 3-4 cups.  Stir with slotted spoon to distribute flour mixture.  Add salt and pepper to taste (be sure to add “enough” or it will be tasteless).  Cook and stir until gravy thickens. 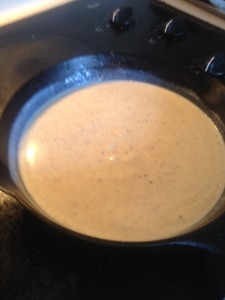 Don’t cook over too high heat, because heating it slower develops the flavor and prevents sticking and scorching. Serve over mashed potatoes, rice or bread. 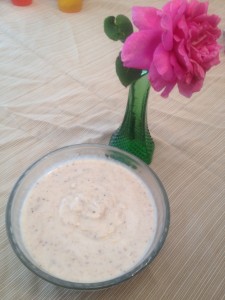