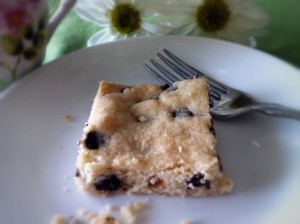 It was one of those emergency recipes.  You know, the ones where you sift through the cookbook to find a recipe that doesn’t call for an ingredient you don’t have.  I had to take a dessert to the church for a funeral dinner in an hour and had planned to make brownies.  Alas, we were out of cocoa.
I had plenty of butter, flour, sugar and chocolate chips but I didn’t want to take chocolate chip cookies.  Then my eyes lit on this recipe.  It called for almond extract and I was out of that, too (note to grocery list).  I added a dash of salt.
It was rather dangerous to take a dish we had never eaten to a public dinner.  But how could you go wrong with butter, sugar and chocolate?
They smelled so good I made a second half-batch that very afternoon.  And the next afternoon.  And two days later.  That’s usually a good indicator that we have a winner.  They are super-easy to make and have a pie crust-type consistency.  And of course  chocolate is always a plus.
Chocolate Chip Shortbread Bars
1 stick butter, softened
¼ cup sugar
1 ¼ cup flour
dash salt
½ cup chocolate chips
Grease 9 x 9 pan.  Mix butter and sugar until light and fluffy.  Add flour and salt; mix until combined (mixture will look crumbly).  Stir in chocolate chips.  Press into pan.  Bake at 350 degrees 20 minutes until golden brown.  Cool on rack 10 minutes, then cut into bars.
If you double the recipe for a 13 x 9 pan, bake 30 minutes.
Try them and let me know what you think—leave a comment below!