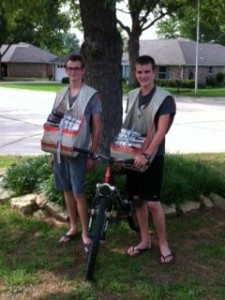 End of a Dynasty
by Charlotte Siems

At 105 degrees, it was so searingly hot they had to take a water bottle for a break in the shade halfway through.  When it was minus 14 degrees, the biting cold and sharp wind took their breath away.   Through pouring rain and blinding blizzards, they trudged through their responsibility 365 days a year, sometimes literally breaking a path through the snow and slipping on treacherous ice.  The newspaper must go through.
Our family is ending a newspaper delivery dynasty after nearly 7 years.  One son after another took the torch as the older one got a real job.  Today marks the end of seven days a week, 365 days a year of NewsPress delivery.  I will no longer command, “Clean up the NewsPress mess!”  It had a nice ring to it.
The original plan was to take the job to help teach responsibility and perseverance.  I think they learned the lessons.  Many times over the years our neighborhood residents commented that they were the best paper boys they’d ever had.
We’ll never forget rolling out early on weekend mornings, and the small disasters of running out of wet sacks or not using wet sacks when it unexpectedly rained.  They can fold and rubber band a newspaper in the blink of an eye.
The best part was definitely the people.  One son took the littlest girls with him on his paper route in a bike trailer when they were toddlers.  The elderly neighbors loved it.  One after another, the boys got to know “the man in the flat house” who requested a special paper fold reminiscent of his days as a paper boy 75 years ago.  On Halloween the big brothers escorted the little girls to the homes of their favorite customers, especially the house with creepy décor in the garage.
With a summer of camps and travel ahead of us, we made the decision to end the newspaper job.  Making about $2 an hour sealed the deal.  Yard work and office work definitely pay better.
Here are a few things the boys volunteered as life lessons they have learned:
No matter how cold or hot or early or snowy or tired, there are some things that have to be done anyway.  Period.  I learned the identical lesson as a young mom.
Honor and respect people whether they deserve it or not.  Yes, Virginia, people cuss out, avoid paying and offer beer to young newspaper carriers.
Don’t procrastinate.  Not ordering rubber bands and avoiding collection of bills only snowballs into a bigger problem.
Relationships and good service pay.  Aside from the meager regular pay, grateful customers sometimes surprised the boys with nice tips.
Change is hard but you have to step out in faith, close your eyes and leap!  It’s tempting to stay in a safe rut, but sometimes you have to make a change to upgrade your life.
I can’t say we’ll miss the early weekend mornings, the daily need to be home in time for routes or the newsprint stains on the tile floor.  Fortunately we don’t have to say goodbye to the neighbors because we’re not going anywhere.  At the end of our newspaper route dynasty we’re grateful for the character lessons and the relationships.  And $2 an hour.
*********************