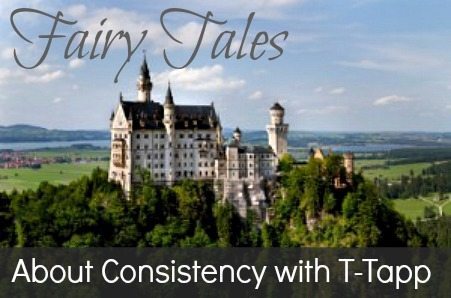 The movie Everafter  is a beautiful version of an old fairy tale.  It begins with the Brothers Grimm visiting a lavish palace, having been summoned by the queen.  The queen tells the story of Cinderella to the fairy tale authors to set the record straight.  She ends her tale by admitting that some of the details of Cinderella’s life have been lost in the telling, but she ends by saying, “The point is, gentlemen, that she lived.”

Most fables and fairy tales are based on fact, with exaggerations and misinformation added in along the way. It’s no different with T-Tapp.  Most misconceptions contain some truth, they’ve just gotten a little distorted in the telling.

Here are some fairy tale myths about staying consistent with T-Tapp:

You have to do a 14-day bootcamp or you may as well forget it.You’re listening to someone who’s never done a 14-day bootcamp.  Once I did a 12-day bootcamp with the Total Workout and by the time it was over I was so exhausted and sore I had to take an entire week completely off.  Don’t get me wrong, some people can sail through a 14-dayer with nary a challenge.  I’m just not one of them.

There’s no fairy tale magic in bootcamps.  They are great to make a mind-to-body connection stronger and to jumpstart stalled inch loss.  Bootcamps have their purpose, for sure.  But they are not the end-all for results.

You need to regularly add weights or other exercise because T-Tapp is too easy.  Ahem.  If you think T-Tapp is easy, you’re doing it wrong.  If you enjoy other forms of exercise, you’re certainly welcome to rotate them after that first month of “T-Tapp only” to build muscle memory.  But it is NOT mandatory or necessary.  T-Tapp alone will build and maintain long, lean muscle and a strong core.

If you skip a day, it’s all over. I understand this panicked feeling.  When I first got started with T-Tapp I was afraid if I skipped a day I would skip a week.  But you know, life happens and T-Tapp is the perfect real-life exercise.  Many times your body will benefit from days off (I know mine did).

If you skip three days, it’s REALLY all over. It’s only over if you never start back up.  I read this definition of an optimist:  “Someone who figures that taking a step backward after taking a step forward is not a disaster, it’s a cha-cha.”  That’s really what it’s about.  Cha-cha-cha!

As long as you’re staying consistent, the inches will melt away regularly and predictably.  It would be nice if this were true, but alas, it’s a fairy tale.  This is not a vending machine, it’s a human body.  Every body is different.  Everyone has their own history, fitness level, health issues, form issues, life situations and mind-to-muscle connection.  I believe it can all be improved and rehabilitated, but it takes time.  We can’t predict how much time.  I don’t know how long it will take but I do know that you’ll stay in Neverland if you quit.

Bedtime stories are pleasant and cozy, but they don’t do much for your hip measurement.  There’s plenty of non-fiction in T-Tapp.  Make sure you’re saving the fairy tales for movies and read-aloud time, then move forward with your workouts in the real world!

Don’t believe the fairy tales! Be encouraged with the truth!