Since our two youngest girls were born two years and three days apart, they often have a joint birthday party. Of course we still celebrate each girl’s special day individually with a meal out with parents, gifts and other fun stuff.  This year we gathered on a Sunday afternoon, and ten of our children and their families attended.

After a lunch of Chicken Taco Soup, cornbread and tortilla chips, the party preparations began.  The birthday girls watched a movie in another room so they wouldn’t see the surprise theme of the party.

Three of our sons went to work smoothing the peanut butter frosting so it looked edible.  I used a new recipe and it didn’t turn out very well, probably because I used natural peanut butter.  The frosting tasted good but the appearance left much to be desired.  So the guys did some modifications on the cupcakes and sang beautiful harmony on the song “Parting Glass” while they worked.  But you wouldn’t know it to see them: 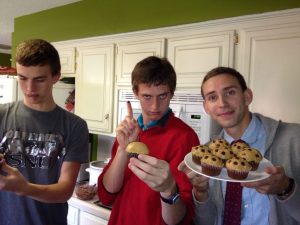 This was a Kevin-and-Tigger-Party.  Kevin is a female Beanie Baby ostrich who is Sophie’s constant companion.  When Kevin gets washed occasionally, we have to re-color her eyes with a permanent marker and apply clear nail polish to give her back a gleam in her eye.  Tigger is Emily’s favorite stuffed cheetah.  He was given to her during an emergency room visit for asthma several years ago and he’s beginning to show signs of wear.  In honor of each “friend,” we had matching cupcakes.

The Tigger Cupcakes were devil’s food, with peanut butter frosting and chocolate chips: 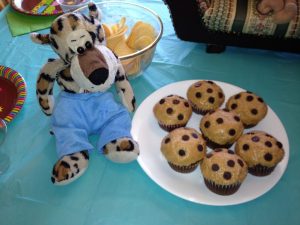 The Kevin Cupcakes were milk chocolate, with chocolate frosting and a ring of whipped cream to match the white ruff around Kevin’s neck: 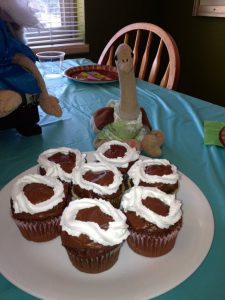 The guests of honor were placed on a doll couch on the table, along with Kevin’s family members (Kevinina, Kevinella and Kevinorah): 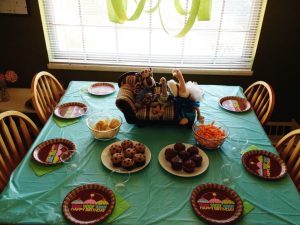 After enjoying the party food, everyone moved to the den where the birthday girls opened presents.  We took turns holding the newest grandbaby, 4-week-old Norah, watching the antics of the other little ones and enjoying the fun of being together for a few short hours.

On such occasions I sit back in wonder at how they’ve all grown up.  I used to think they would stay little forever.  It’s such a delight to have them home together and listen to the hilarious (and sometimes serious) conversation.  The college students usually fall asleep on the couch because “home” has a familiar, peaceful feel. I like that.

Yes, it was work to get up early and put the big batch of soup in the crockpots before church.  It was inconvenient to make fifty cupcakes.  We could have skipped the decorations and “theme.”  But that effort pays off in the long run (and the short run, too!).  Meals and celebrations are among the sweetest memories of family life, and making them more special and beautiful fills our hearts with home.