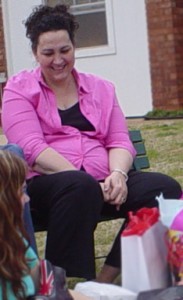 New Jeans are Nice, But Great Health is Better
by Charlotte Siems
Wearing the clothes we want to wear is a great feeling. Wowing old friends with our new and improved appearance is a rush. Calling our husband or girlfriend from the dressing room, with the news that we fit in the next size down, is a blast. Good stuff to be sure! But when you think about it, these results are just icing on the cake compared to the great things T-Tapp does for our health.
When I weighed 258 pounds and wore a size 22W, my health was going downhill fast. At the time I was 47 years old; a perimenopausal woman with a one-year-old and a three-year-old. It seemed that all of a sudden, life had caught up with me. From my vantage point in the recliner, I had an epiphany: I wanted to be alive and healthy for my littlest children in the years ahead, to do the things with them that I had done with my older children.
My health issues read like a laundry list of complaints:

When I found T-Tapp, I hoped to lose a couple of sizes for upcoming weddings. After just two weeks of exercise, one of my children said to me, “Wow, Mom, you’re not tired all the time anymore.” I was shocked and pleased. In addition:

In fact, menopause deserves further explanation. A couple of years ago I began experiencing sleep disturbances and unusual fatigue, along with other symptoms of hormonal and thyroid issues, including a 15-pound weight gain in 3 months with no change in my eating patterns.  My health care provider did several types of tests and diagnosed low thyroid, adrenal fatigue and severe hormone imbalance.
She was absolutely amazed at the mildness of my symptoms compared to the hormone levels.
She kept staring at me while she asked how I felt. Did I feel angry and aggressive? No, just a little anxious. Was I exhausted? No, except for a few times after workouts. I told her that I consistently did T-Tapp workouts and I figured that was what had kept me on an even keel.
The practitioner was so impressed that she began T-Tapping herself and lost a size in the first month!
Everyone began asking her what she was doing and now she recommends T-Tapp to her patients who struggle with thyroid problems and mid-life hormone upheavals.
I know several people personally, who feel that T-Tapp gave them their life back. Each of these women were considering surgery for back or knee problems, but no longer need it. The T-Tapp forum and website are full of success stories of people finding amazing health improvements. It’s the real deal, folks.
Smaller jeans are nice and compliments are fun, but I’ll take great health and energy any day.
Please leave a comment below!
**************************************************