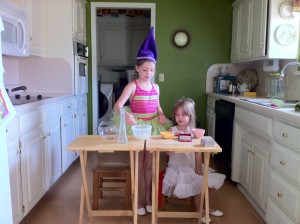 From my observations of our adult children, many of their current interests and giftings reflect the way they spent their time growing up.  The ones who worked on bikes became master bike mechanics who have used this skill to minister to college students.  The one who played the piano through the hymnal became a public school music teacher.  The one who took photos became an amazing professional photographer.
And then there’s the one who created lifelike guns out of wood, paint and glue—and now carries a real gun to work every day.
Ever since our older children were young, we’ve had some family guidelines for Productive Free Time.  In other words, there were “approved” activities for free time after school in the afternoons and on weekends.
At first we had a written list but after a while everyone got a feel for what worked and eventually it became second nature.  The younger children grew up with the framework so it became a part of their experience from birth.
The main objective was to prevent wasting too much time on pursuits that were, well, a waste of time.  Excessive video games, TV watching, and phone calls come to mind.  Current society has created a new challenge of excessive texting among children and teens.
Here’s a list of activities that we would consider to be productive:
Legos, blocks and other building toys
Drawing
Reading
Playing a musical instrument
Woodworking
Playing outside
Fixing bikes or equipment
Crafts
Sewing
Board games
Toys (usually if they’re a waste of time, they won’t play them long)
Building a structure outside
Building a structure inside (like a tent with blankets and chairs)
Pet care and play
Pretend play (playing house, pretending to be animals, etc.)
Cooking
Picnics
Recently our two youngest girls used Bendaroos (wax-covered, shapeable string) to make spoon people, complete with a basket that opened to reveal a baby spoon: 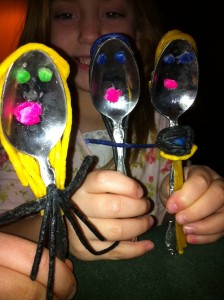 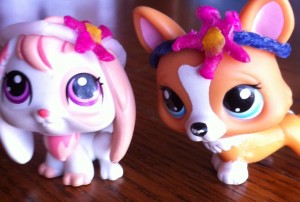 Notice that Mom didn’t give instructions for this type of creative play.  They came up with it on their own, strengthening their problem-solving and thinking skills at the tender ages of 6 and 8.
If you haven’t had guidelines for free time before there might be an adjustment period.
The guidelines are not meant to be rules about what they have to do.  The acceptable activities should reflect their interests and the materials should be provided in an easily accessible place.  Seeing a spread of brand new markers, fresh paper, glue, glitter and paint is usually enough to get the creative juices flowing.
Creativity is messy.  Expect things to get scattered.  Put up with the blanket fort for a day or two.  Allow the PetShops village to remain on the dining room table for a few days.  I promise they won’t make that mess when they’re thirty.  Childhood is a very short season.
When they leave for college or move into their own apartment, you can release them to spend their free time however they want.  But as long as they live in your house and you pay the bills, you can have guidelines for how they spend their time.
Those guidelines might shape some of their fondest childhood memories.   And what they do in their spare time could end up pointing them in the direction of their future.