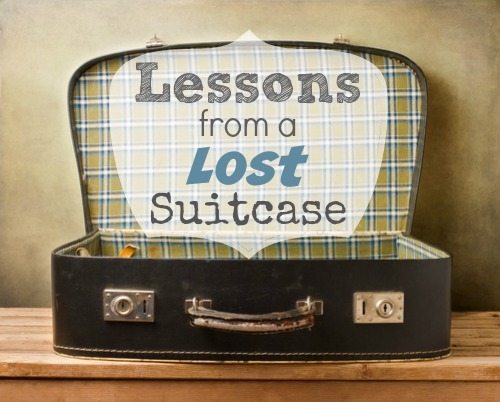 For the first time in 34 years, I overslept on a morning when there was an early flight to catch. I had stayed up way too late packing (and unpacking boxes in our new home), so when I woke up 40 minutes past the alarm, let’s just say that makeup was applied in the car on the way to the airport.

During check-in the airline employee assured me that I had time to catch my flight. I noticed that she put a “late check-in” label on my bag. Fortunately, I did make the flight just in time and from there the trip to Washington D.D. proceeded smoothly.

I wasn’t surprised when my suitcase didn’t arrive on the airport baggage claim carousel, and the staff seemed sure it would arrive on the next flight.

Hours passed and as the time neared for a special evening event, I began to make numerous phone calls. When the baggage claim office was finally reached, I was informed that my bag had not arrived on the expected flight. I swallowed my pride and wore travel clothes to a welcome reception where the dress code was cocktail attire.

After the reception, I made more calls. The employee assured me that the bag would arrive on the final flight of the day, and that she would call at 11:00pm when it did. The hotel provided a toothbrush, toothpaste and contact lens supplies. I fell asleep waiting for the call that never came.

The next morning I made no less than 24 attempts to reach the baggage claim office. When an airline customer service representative was finally reached, they discovered that the bag had actually arrived the night before but the office was not open yet and the bag would not be delivered until afternoon. The rep assured me that he would leave an urgent message to have it taken to the new hotel where I would check in later in the day.

More pride was swallowed. I couldn’t let myself cry because it would ruin what was left of my day-old makeup. I wore the same travel clothes to an exclusive expensive department store, where I was the guest of the winner of an all-day shopping spree with some prize money of my own to spend. By late morning I had a session at the makeup counter so at least the smudged mascara and and dry skin was fixed.

It’s a good thing I used some prize money to buy an unplanned outfit “just in case,” because there was another nice dinner to attend that evening. After phone-wrestling with the baggage claim office late in the afternoon, it was determined that my suitcase would be delivered to the hotel that evening, at my expense. The bag did indeed arrive….during dinner.

Throughout the ordeal, I wish I could say that I handled it well. Maybe I looked calm on the outside, but inside I was doing a lot of praying, soul-searching, attitude-adjusting, and questioning of myself and my circumstances. It wasn’t pretty.

The saving grace was pulling my thoughts back around to gratefulness that I was still able to attend the events. Pride and self-focus were revealed in me, and now that it’s over, it would be nice to have a do-over. I worked on NOT being mean to myself over having overslept. We had moved to a new house just a few days before and I was truly sleep-deprived, so no sense beating myself up. Another lesson learned.

It wasn’t surprising that when I read the next morning’s chapter in a devotional book, this caught my eye:

The late suitcase incident taught me a few things, the first being “jump out of bed when the alarm rings on days when you have an early flight to catch.” But most of the lessons were related to my own character issues and perspective. Of course it’s normal to want to look our best at a special event, but I was a little too eager to explain to whoever would listen that my suitcase hadn’t arrived. It was all about me. Yikes.

The rest of the trip was a whirlwind of meetings, meals and fun. The drama of the lost suitcase faded, but the lessons remain sharp and clear. Awareness is the first step in change (or repentance). And I arrived early at the airport for the nonstop flight home.