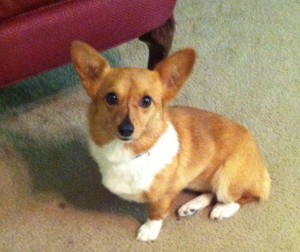 Living in the Past or the Present:  Lessons From a Dog
by Charlotte Siems
We’ve had a variety of pets over the years:  hamsters, guinea pigs, fish, chickens, dogs, cats, rabbits and even a ferret.  Most of our pets have been family pets, with the responsibility for their care divided up on the chore list.  But occasionally a child has had the privilege of claiming special ownership of a small animal and being almost solely responsible for its tender care.
Our daughter Gracie has been asking for a puppy for years.  What girl doesn’t want a puppy or a kitten (or a horse)?  Every birthday, every Christmas, a puppy always made the list.  There was always a reason why it wasn’t practical, so time passed and the puppy remained a dream.
The week before Gracie’s 14th birthday, I had a sudden revelation that if she didn’t get that puppy soon, she would grow up, leave home and always remember the puppy she’d never had.  So the search began.
We looked online and let friends know that we were looking.  A few days before her birthday, my husband took Gracie to breakfast and sprung the news:  she was getting her very own dog.  That afternoon we made a trip to the animal shelter.  Oh, dear.  We wanted every one.
Then the call came from a friend.  She knew of a young dog for whom someone was looking for a good home since they were moving.  We did a quick online search to read about the Corgi breed and decided she sounded perfect.  We made a quick trip an hour away to meet our friend and brought home a small female Corgi, less than a year old.
The dog was christened “Laci” after considerable debate.  Then the fun began.
From what we can guess, Laci must have been left alone in a quiet crate much of the time.  With an only child.  Imagine the adjustment, moving into a busy household with people almost always around.  Laci spent her first day cowering under a chair in the master bedroom.
She had originally been adopted from a rescue organization, so we don’t know her background.  She flinches at feet and sticks and sudden noises.  We showed her nothing but kindness, affection, and soft voices.  But she persisted in hiding under the chair.
I was struck by the thought that Laci was living in past reality.  What had happened to her months ago was not happening now, but it had created expectations and behaviors.  Her prospects for the future are bright but she is living as if the past is happening now.
Sound familiar?  How often do we do the same?  Coming from a background of abuse I have found myself remaining in habits of thought and action, doing what feels normal and safe.  Anxiety, the feeling that someone is mad at me, waiting for the other shoe to drop and the good thing to end—that felt familiar and true for most of my life.  It has colored my reactions and relationships many times.
Realizing what’s going on is a big step towards healing, and that may take someone who is an ambassador for truth in your life.  Taking thoughts captive like a prisoner, with courage and aggression, is another.  Power-washing your heart and mind with constant input of Truth will transform you to live in the present, looking forward to the future.
I’m happy to report that little Laci is quickly warming up to the family.  She receives and gives affection and has spent hours snuggled up to her new owner.  Today she spent most of the day in “public,” forsaking her isolated hiding place and living where the love is.
I think that dogs learn some things quicker than humans.  But we can take hope from Laci’s example and live in the reality of today, in our good life, with gratefulness and confidence.
Please leave a comment below.
**************
****************