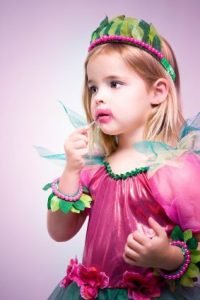 Movie Stars, Makeup and Muscle Activation
by Charlotte Siems
With children who like to make videos, we have a family archive of home movies.  These aren’t just videos of birthday parties or visits from relatives.  They are full-fledged movies with a plot, characters, music and drama.  There’s the black-and-white silent film Beauties, Villains and an Indian, and the epic semi-horror movie Bike Patrol starring a creepy doll named Calculator.  The kids have even done a sequel to a popular movie, Black Eye Returns.
Visiting nieces and nephews joined the cast in some of the movies.  They did a really good episode of the original Star Trek after Old Navy had a clearance sale on long-sleeved t-shirts with dark neck bands.  One nephew had the misfortune to play the part of an “extra” which meant, of course, that the space creature got him.
But some of the funniest movies were made when an older sibling filmed one of the little girls putting on makeup.  We have several versions of these, depending on which little girl, since we had a pretty good supply in earlier years.  They would set up a spot with hair accessories, lipstick, eye shadow, powder and mascara, then invite the preschooler to use all of the previously forbidden beauty supplies.
Bless their hearts, they really thought they were making themselves beautiful.  The person filming would try not to laugh but occasionally you could hear a snicker as they encouraged the little movie starlet to create her new look.   Within minutes the little girl would apply blue eyeshadow to her cheeks, mascara to her eyebrows and garish red lipstick all over her mouth and chin.  Now that the stars are older, these movies are a hilarious (and precious) blast from the past.
Like the unsuspecting little makeup artist, sometimes we think we’re doing something right but we don’t really quite get it.  This applies to T-Tapp when we first start out.  There is so much to think about, and we can only work with our own brain and body.  Everyone starts from a different place, with differing levels of muscle awareness and fitness levels.
Lack of muscle activation is probably the #1 form issue that affects results.  T-Tapp form is designed to activate muscle, using principles of alignment and isometrics (muscular effort against resistance, usually another body part, to strengthen and tone).   What does this look like?  Maybe it would be easier to tell you what it doesn’t look like.
Donut fingers barely touching, not pressing.  Arms flopping through space with bent elbows.  Losing the tuck.  Straightening knees.  You get the picture.
Before you feel hopeless and throw in the towel, let me remind you that I was right there with you.  My T-Tapp form as a size 22W was as good as I could make it.  I flopped through workouts and released muscles with the best of them.  But I didn’t stay there.  I kept learning and asking, and getting stronger and more aware of where I was in space.  But that took time.  A long time, for me.
Flashing disclaimer:  My form is not perfect now.  Never will be.  Just progressing.
The good news is two-fold:  No one is filming you and no one is laughing at you.  We’re all in this together, learning and moving forward at our own pace emotionally and physically.  And remember that it is doable, and completely worth it.
When it comes to muscle activation, if you’re getting results, congratulations.  If you’re not, be patient and learn.  If you’re stalled, be patient and learn.  Attend a live T-Tapp event if possible, or do a video review with a trainer for some great help.
Just like those little girls will grow up and learn to use makeup properly to get better-looking results, we all “grow up” in T-Tapp as we continue to get stronger, stay consistent and learn.  Sooner or later, you’ll be the star in your own success story!
I’d love to hear what you think.  Leave a comment below!
*******************