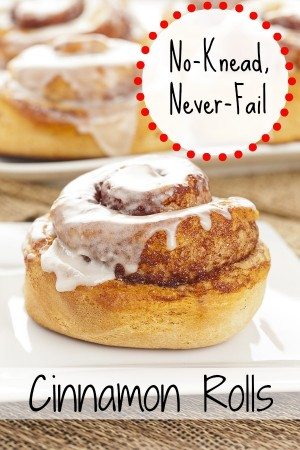 This is one of those recipes that has stood the test of time.  It’s a favorite for Saturday mornings or holidays or whenever grown children are home for a visit.

My favorite part?  No kneading. We usually make the dough the night before and let it rise, covered, overnight in the refrigerator.  In fact, I usually talk someone else into making the dough.  Then I get up early in the morning to put together the cinnamon rolls and pop them in the oven.  Everyone else awakens to the heavenly aroma of bread baking and hot coffee.  Ahh!

2 cups warm water
2 pkg. quick-rise yeast (or 4 ½ tsp.)
½ cup sugar
2 eggs
¼ cup oil
1 ½ tsp. salt
6-7 cups flour
butter
cinnamon
brown sugar
Dissolve yeast in water; add sugar, oil, salt and eggs.  Mix well.  Add flour in two or three additions.  Mix flour into dough until stickiness disappears, using oiled hands to mix in the final flour in the bowl.  Let rise till double.  Punch down and make into rolls.
To make cinnamon rolls:
Divide dough in half.  On an oiled surface, with oiled hands and an oiled rolling pin, roll out and spread the dough into a rectangle. It’s okay if the dough is a bit sticky. Spread butter on the dough liberally.  Sprinkle liberally with cinnamon.  Sprinkle liberally with brown sugar.  Roll up the long side of dough and seal the edge.
Cool tip:  Cut a piece of sewing thread about 18” long.  Holding an end in each hand, slide the thread under the roll of dough.  Criss-cross the threads over the top of the dough, then pull on them like you’re tightening a knot.  It will cut cleanly through the dough.For rolls or cinnamon rolls, place in a greased 9 x 13 pan (probably two) and bake in a 375-degree oven until golden brown.

Melt butter in saucepan.  Add brown sugar and stir until melted and combined.  Continue cooking until mixture comes to a boil.  Remove from heat and add milk to make a glaze.  Spoon or pour over warm cinnamon rolls.