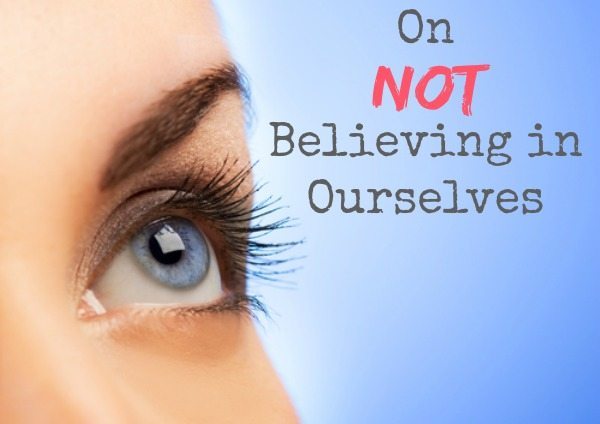 “I just don’t believe in myself.”

Sound familiar? Boy, these words are certainly familiar to me, because I said them to myself many times. There’s a line in a Dr. Seuss story that says “I said and said and said those words. I said them, but I lied them.” They were lies because they were simply not true. But I chose to keep the lie going.

What am I talking about? Well, all those things I’ve wanted to do but talked myself out of doing. All the times I slowed myself down or blocked myself from moving ahead. The days I wasted comparing myself and always coming up short.

“Not believing in myself” sounds humble but it’s really a form of pride. Self-focus is the root of pride, and constantly berating ourselves is most definitely self-focus.

It may seem noble to say “I don’t believe in myself” but mostly we’re using it as a coverup for fear. God already believes in us. He’s got stuff for us to do. Are we saying that we’re smarter than Him?

When we tell ourselves the bedtime story of not believing in ourselves enough times, we memorize it and internalize it, and it becomes our lifetime story. We get comfortable in that role of small confidence. We reinforce it by speaking it and thinking it, and carefully explaining it to others who just don’t get it. They look at us and think “Well, of COURSE you can,” but we insist on maintaining our carefully constructed self-image.

Maybe somebody lent us those beliefs long ago. No matter. We can choose to give them back.

As long as we tell everyone we don’t believe in ourselves, it lets us off the hook to do bigger things. Deep, deep down we know we can, but it’s safe and familiar to remain un-confident. We sigh and look at others who have done the things we know we can do, and tell ourselves that they’ve *got it* and we don’t….but we do.

If our first reaction is to rush to explain why we’re different, that’s a clue that we’re protecting our position. After all, if we quit telling everyone we don’t believe in ourselves, what will stand in our way? Won’t that be scary and big and hairy? Maybe so, but it will also be freedom and light and truth.

Maybe I’m the only one who needed to shine a light on myself and what I’ve been believing about myself for far too long. Or rather, what story I told myself so often that I believed.

All I know is that some serious boldness is rising up in me to declare one of my life verses:

And God is able to make all grace abound toward you, that you, always having all sufficiency in all things, may have an abundance for every good work.

No more speaking, thinking or believing lies. I believe in myself.