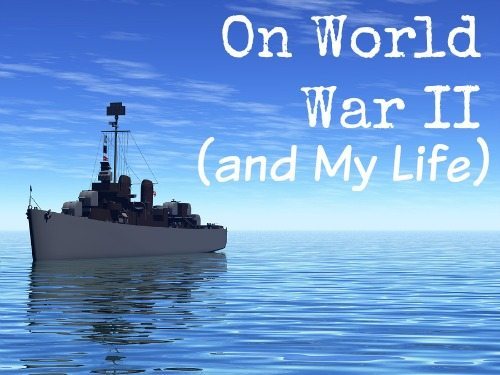 The House of Sixty Fathers by Meindert DeJong

The Scarlet and the Black, starring Gregory Peck and Christopher Plummer (based on the true story of a Vatican priest who ran an extensive underground organization aiding escaped Allied soldiers and Jews under the noses of Nazis in Rome. The final “what happened next” is incredible)

The Enemy Below, starring Robert Mitchum and Curd Jurgens (exciting cat-and-mouse game between the captains of an American destroyer and a Nazi submarine)

Gung Ho! and Go For Broke, both black and white, slightly corny propaganda-type movies with a good story line nonetheless

The Longest Day (the “longest movie” detailing the events of D-Day, with a huge cast of vintage stars)

I know the list could go on and on. I really didn’t intend to write a post about World War II resources. We’re a bit of a World War II buff family, probably from years of having six sons at home.

I got started with all of this by thinking about how grateful I am.

After reading this morning about a little Chinese boy lost in the mountains after his family’s village was burned by the Japanese, who suffered hardship and starvation while rescuing an American airman, and cried for his mother in lonely moments–I was grateful my children are home with me.

After reading about a starving little boy who ate mud because he was so hungry–I was grateful that we have plenty of good food.

After watching a movie showing the Nazis storm a neighborhood and round up innocent people to send them to concentration camps–I was grateful for freedom and safety.

I don’t have any bad days. My life is not hard. Busy-ness and ordinary days are amazing. Cleaning house and doing laundry are privileges. My sons get up and go to work in the mornings, not to battle. The list could go on, but you get the picture.

Sometimes a little perspective adjustment is a good thing.