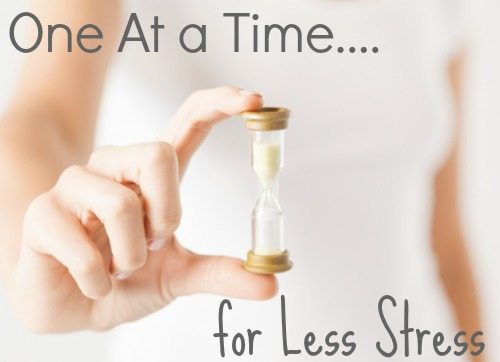 Sometimes we have such strong habits of thought that we don’t realize their power over us. We have no idea how they affect us nearly every day. But every once in a while, we have a moment of clarity and things change. I had one of those yesterday.

It dawned on me that I was feeling calm and moving through my day productively. I tried to figure out what was different, because I have a ton of upcoming events and responsibilities and usually feelings of stress would be rising during a season like this.

And then it hit me.

I was focusing on what I could do at that moment. Not tomorrow or next week or two months from now.

When faced with a mountain of work before us, we often feel anxious and overwhelmed. But the feelings are not caused by the work, they are caused by our attitude and thoughts—part of which are that we think we should be able to do everything all at once.

The truth is that we can only do one thing at a time.

This sounds so simple it’s silly, but it’s actually very deep and meaningful. When we convince ourselves of this obvious truth, it enables us to mentally stop trying to do the things on this afternoon’s list and tomorrow’s list and every other list in this moment. We bring the stress and anxiety of tomorrow and next week into this moment.

It’s not so much the work we have to do, it’s the way we think about it.

If you’re like me, you might even bring guilt and shame and feeling like you’re in trouble into the mix. That’s a way of bringing the past into the moment.

Just becoming aware of that helps it diminish. Gee, nobody is going to punish me if I don’t get my desk cleaned off or a message sent—but I’ve brought that old familiar feeling into my work as if they are. It’s pretty freeing to realize I’ve been doing that, and let it go.

No matter how much we have to do, we can only work in this very moment. Why spoil it and make it harder by thinking we can do the impossible and do the next minute’s work right now, too? It’s like an hourglass: only one grain of sand can pass through at a time.

Do yourself a favor. Bring your thoughts and focus into right now. Don’t multi-task in your brain and stress yourself by thinking about what ELSE you have to do. Just do what you CAN do, right now. Then move to the next thing.

Sure, we need to make lists and plan ahead. I’m not saying that we should live for the moment and forget the consequences. I’m just suggesting that once you know your task, do it wholeheartedly without being mean to yourself or hurrying yourself because of what’s ahead. Focus, and you’ll probably find that you feel more peaceful and are more productive.

Remember the image of an hourglass. One thing at at time. This moment.