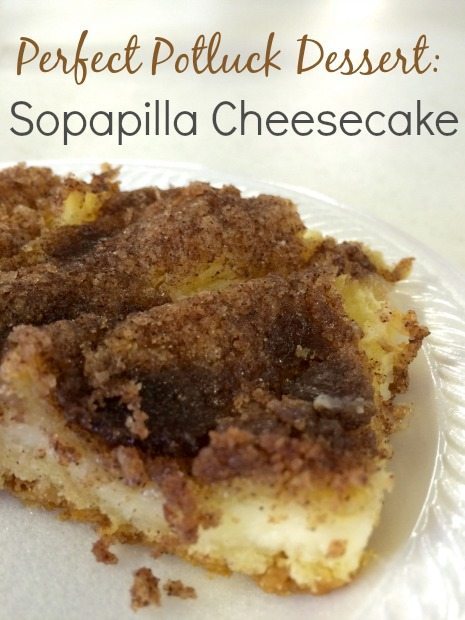 Church potlucks can be an amazing dining experience, with everyone bringing their best dishes to share. As a pastor’s wife I’ve attended my share of potlucks over the years, and I have a few favorite recipes for dishes that I like to bring, depending on the theme.

To be honest, I’d eaten this cheescake a few times over the years but didn’t care for it all that much. The versions I tried were pale and soft, with barely a sprinkle of cinnamon on the top.

When my oldest daughter Sarah tweaked the recipe and served it at her brother’s graduation party last spring, I changed my opinion in a hurry. We had a Mexican food potluck with our Sunday School class last weekend, so I texted her and asked for the recipe. The topping on this version reminds me of cinnamon toast broiled in an oven, with its delicate crispiness.

Preheat oven to 350 degrees. Spray a 9 x 13 baking dish with cooking spray. Beat the cream cheese with 1 cup of sugar 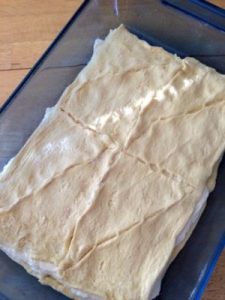 and the vanilla in a small bowl until smooth. Unroll a can of crescent roll dough and press into the baking dish. Press dough to edges of pan and press perforations together but it doesn’t have to be perfect because the dough will puff and join together during baking.

Evenly spread the cream cheese mixture on top of the dough, then cover with the remaining can of crescent roll dough. Don’t worry about making it gorgeous because it will be covered with the cinnamon topping. Stir together the melted butter, cinnamon and ¾ cup sugar and pour over the cheesecake.

Bake in a preheated oven until golden brown, about 30 minutes. Cool completely in the pan before cutting into squares.

We have a western-themed potluck this Sunday, and I just might bring this cheesecake again!

Try it and tell me what you think!