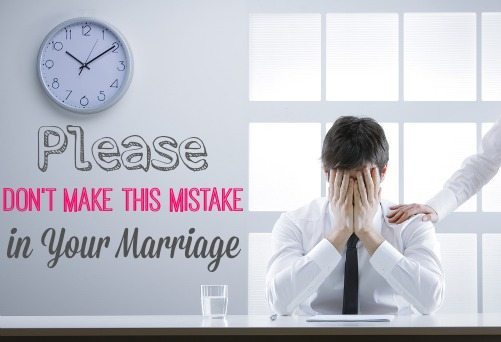 Having been married, mostly happily, for 34+ years, certain observations have been made along the way. My husband is a pastor. He has performed dozens of weddings and dealt with the aftermath when the couple spent more time planning the wedding than learning about marriage. This particular mistake that I’m warning you about seems very common among young wives, but it runs rampant in marriages of all ages. It’s responsible for a lot of misunderstandings and misery. And it’s pretty easy to avoid, once you’re aware and willing. So please don’t make this mistake in your marriage…

Shaming your husband can take many forms. Making a joke about him, especially one that demeans his masculinity. Ordering him to perform a task. Criticizing how he does something. Disagreeing with how he disciplines a child. Stepping in to “save” your child from some work your husband has asked him to do. Rolling your eyes or saying “whatever” at his suggestions.

What’s the result of women shaming their husbands?

He will often react in anger. Have you ever made what you thought was an innocent remark and found yourself puzzled at your husband’s angry reaction? You probably shamed him in some way. His anger is triggered by a feeling of vulnerability and men don’t like to feel vulnerable, dumb or helpless. Women don’t like it either, but it’s particularly painful for a man who is designed to protect and lead.

It won’t take long for him to give up trying to please you. If he feels like he can never do anything right, why would he want to try?

The very worst shame is to ridicule his masculinity. Even in a joke. Please don’t. He might not show it, but it makes a man shrivel up inside and it’s excruciating for him.

Most of the time women don’t even realize they’re shaming their husbands. They think he should be able to take a joke. They’re in a hurry or think they know how to do it better. They have a skewed view that their husband should put up with anything indefinitely, because they’re tired and stressed and, for heaven’s sake, hormonal. So taking it out on him and expecting him to man up when they cut his very soul with their words seems like…not a big deal. But it is.

Women want to be loved. We fear not being loved and wanted. Men want to be respected. They fear being shamed.

When women respect and honor men, men respond in love. It lifts a burden for them and even makes their heart sing. They feel loving towards the woman who made them feel this way, and act accordingly.

Turn up the volume and listen to yourself as you speak to and about your husband today. Are you treating him as a respected man or a naughty five-year-old? Do you expect him to do what you say…and then put up with your moods, too?

Purpose in your heart to never knowingly shame your husband. You might be surprised at how often you have been and by what happens when you no longer do.