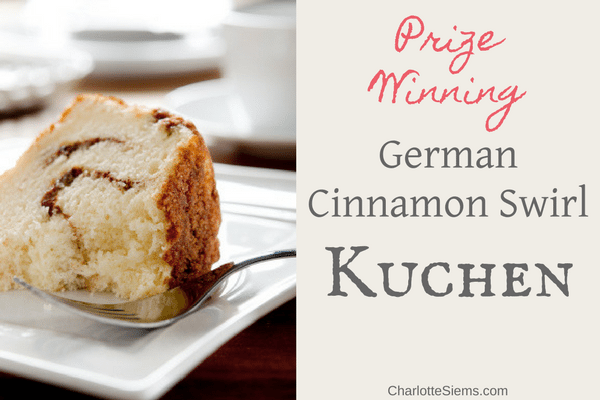 Several years ago three of our high school boys had the privilege of taking an online German class.  They had an inside track because the university professor attended our church, so she met with them weekly for live tutoring sessions.
At the end of the school year they entered several categories in the annual high school German festival “Deutsch Fest.” In the search for projects, one of them found a recipe for a delicious German cinnamon coffee cake. They also entered a Lego creation of a German castle and a cross-stitched bookmark, both of which won prizes.  Their hilarious skit (in German) and prose reading also placed first.  It was rather satisfying to hear “Siems Homeschool” named several times at the awards ceremony among the large state high schools.
Alas, the beautiful Cinnamon Swirl Kuchen didn’t place.
But it got first place at the County Fair a couple of years later, thus earning the title of “Prize-Winning.”
Cinnamon Swirl Kuchen
(Note:  the original recipe called for 1/2 cup butter, 1/2 cup shortening–we substituted to avoid shortening)
3/4 cup (1 1/2 sticks) butter, softened
1/4 cup coconut oil
2 1/3 cups sugar, divided
4 eggs
1 cup milk
2 tsp. vanilla
3 cups flour
3 tsp. baking powder
1 tsp. salt
2 tsp. ground cinnamon
In a large bowl, cream the butter, coconut oil and 2 cups sugar until light and fluffy.  Add eggs, one at a time, beating well after each addition.
Combine milk and vanilla; set aside.  Sift together flour, baking powder and salt; add to creamed mixture alternately with milk mixture, beating just enough after each addition to keep batter smooth.  Combine cinnamon and remaining sugar; sprinkle 1 1/2 teaspoons into a greased bundt pan.
Pour one-third of batter into pan.  Sprinkle half of remaining cinnamon/sugar; top with one-third of batter.  Repeat with remaining cinnamon/sugar and batter. Smooth top with spatula.  Bake at 350 degrees for 1 hour, 15 minutes.  Cool for 10 minutes before removing from pan to a wire rack to cool completely.
We haven’t had a perfect removal from the pan yet, but boy, it tastes great.