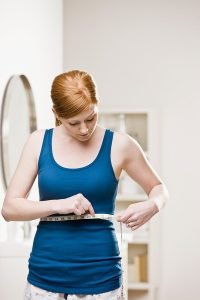 It’s no secret that having a baby changes a woman’s body.  And having twelve babies has twelve times the effect.  By the time I found T-Tapp in 2007 my abdominal measurement was 52” and I had a large separation of the abdominal muscles.
After a year and a half with T-Tapp, I had lost:
5” from ribs
12” from my waist
16” from abs
12” from hips
4” off each arm
In the three and a half years after that, I lost an additional 3” from my ribcage.  Let’s think about that.  When I was at my lowest weight—actually too skinny if you ask me—my ribcage was 3” bigger around than it is now.
Our biggest baby weighed 11 pounds, 10 ounces and was 24” long.  (Ben stayed big as a child and was the same size as his brother who was two years older until he had his teen growth spurt, when he shot up to 6’5”!)  Several of our other babies were over ten pounds. 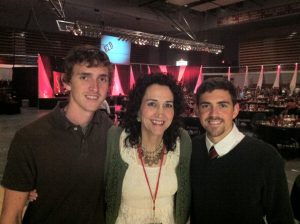 When T-Tappers meet me for the first time, the most common comment is “Wow, you’re tall!” At 5’11” I’m above-average in height, but my bone structure is pretty small.  Even before having children my ribs were prominent, and after twelve full-term pregnancies my ribs flared even more, to the point that I was self conscious about them.
It’s interesting that over time, my rib cage continued to pull in with consistent T-Tapp workouts.  It’s an area of my body that I like a whole lot more now, as my rib cage no longer looks disproportionate or distended.
There are a couple of things that contribute to cinching in the ribs with T-Tapp:
Losing an additional three inches off my ribcage even while weighing more than I did at my lowest weight is just another example of the ongoing rehabilitative and reshaping effects of T-Tapp.  If you’d like to see some inch loss in your rib cage, try the breathing tips.  If you listen closely you’ll hear Teresa Tapp cue it throughout the workouts.
Stay consistent over the long haul and see how T-Tapp can help you get a smaller rib cage!