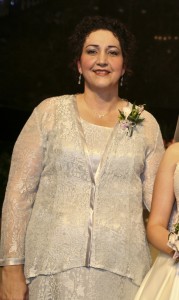 The Summer of the Weddings—Size 18 to 16
by Charlotte Siems
Three family weddings were planned that summer.  This meant numerous shopping trips for a wedding dress, time spent researching florists and photographers, and shopping for just the right decorations for the ceremony and reception.  Long days were spent at the sewing machine, making a total of six flower girl dresses for various weddings, and stitching yards of filmy tulle for two bridal veils.  Outfitting a (very) large family for a special occasion is no small feat.  Besides tux fittings for those in the wedding party, gathering dress shoes, socks, belts, pants and shirts for decidedly casual teenage boys is an exercise in bargain hunting.   The girls needed fancy dresses, shoes and hair accessories (complicated by the three-year-old’s recent do-it-yourself haircut).
Then there’s the food.  A rehearsal dinner in a barn for 60 people, with brisket and homemade ice cream.  Hundreds of chocolate-dipped pretzel rods and Scotcheroos requested by the groom.  Feeding the multitudes and visiting relatives before and after the weddings, not counting changing diapers and keeping up with laundry.  Let’s just say I was busy.  And in the middle of losing sizes with T-Tapp.
As we prepare for another family wedding this summer, I feel nostalgic about the last time I bought a special dress for a wedding, four years ago.  Permit me to reminisce….
The day before my son’s wedding I realized I didn’t have anything to wear.  I bought a black skirt and a shiny aqua blouse in size 18 and felt positively thin when I walked down the aisle.  I had resolved to get past my disappointment that I hadn’t made it to a size 16, but I decided to keep going with T-Tapp.
Three weeks later I sat in the audience at my nephew’s wedding in another size 18 blouse and skirt.  Friends I hadn’t seen in a long time noticed the difference in me because I had worn a size 22W the last time they saw me.
A month later, the day before my daughter’s wedding we gathered at the church to decorate.  Family members hadn’t seen me since the previous wedding and I had just bought my first pair of size 16 capris.  Their surprise at seeing me was exciting.
During a break in the work someone made a run to the local hamburger place for lunch.  Just that week I had begun to eat only when I was hungry and stop when I was full. I ate half of my hamburger and marveled that I was full.
I took a chance and ordered a Mother of the Bride dress online, scheduled to arrive a few days before the wedding.  It was a size 16 and….it fit.  I was so proud to light candles at the front of the church and have a waist. 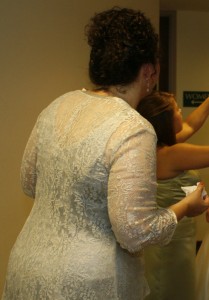 Throughout the crazy days during The Summer of the Weddings, I stayed consistent with T-Tapp.  That was possible because I did mostly fifteen-minute workouts, mostly early in the morning before the day’s ball started rolling.  After three months of being “stuck” at a size 18, it was a great encouragement to drop to a size 16 by the third wedding.  Mind you, I had set a goal to be in a size 14 by that wedding.  That goal was finally reached more than two months later.  If I had quit in discouragement and frustration because I wasn’t losing sizes as quickly as I had planned, I wouldn’t have eventually reached my goal.
Soon I will begin shopping for another Mother of the Groom dress, this time on the size 6 rack.  Four years ago I would never have dreamed that single digits were in my future.  I didn’t think it was possible, given my history of twelve children and years of being a couch (make that recliner) potato.  But simple choices add up and I just kept Tapping and eating between hunger and fullness.  I wasn’t perfect.  I’m still not.  But the rehabilitation happened over time and results eventually showed on the outside.
One last note—being a size 16 or 18 at those weddings didn’t make me any less beautiful to my husband and family.  I already felt so much better and was so grateful for my health improvements.  It is odd to look back at the photos now that I have been a smaller size for years.  I share them with you to encourage you wherever you are in your journey.  Between my son’s wedding in May and my daughter’s wedding in July, my back fat melted away.  T-Tapp helps you look good AS you lose sizes!
This summer we have only one wedding but it takes place in a city nine hours away.  Feeding and clothing the multitudes will once again require planning and strategy.  And I’ll still be doing those fifteen-minute T-Tapp workouts.
******************