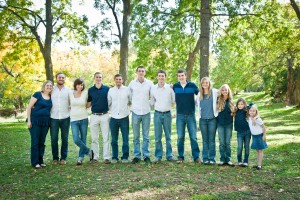 “It was the best of times.  It was the worst of times…” So begins Charles Dickens’ epic novel A Tale of Two Cities.
I could relate.  Having four children under the age of four was both joyous and draining.
My first pregnancy had ended in miscarriage.  Heartbreak and months of infertility, surgery and the statement by one doctor that he didn’t know if we’d ever have children ended with an ultrasound that showed a surprise pregnancy.  Those memories later helped me cope with endless diapers and sippy cups, when I would say to myself, “I’d rather be doing this than have NO children!”
We had two sons and two daughters and at times I felt like the most blessed woman alive.  Except for the times when I was exhausted with nighttime feedings and laundry, and went down the road of self-pity and believing the myth that this would last forever.  I assure you that babies and toddlers grow up.
We eventually let the worst of times get to us.  The decision was made for my husband to have a vasectomy.  I felt torn but somewhat relieved.  I knew that someday those four children ages 1, 2, 3 and 4 would all leave home at practically the same time and that bothered me.  But everyone advised him to “get fixed” (it’s actually “get broken”) and so we went through with it.
It didn’t take long for me to realize that it had been a mistake.  I read somewhere that a doctor has written a book stating that virtually everyone who gets sterilized regrets it at one time or another.  The thought of no more babies—ever—became very sad.  I didn’t nag my husband or beg for more children.  I did pray (and cry sometimes).
After about a year and a half, my husband had a personal spiritual experience that included a commitment to let God plan our family size.  He and a friend flew to Chicago where he had a second surgery, a vasectomy reversal.  Those are his stories to tell, and some of them are quite funny.
Eleven months later the first of our eight reversal babies was born.
Yes, there have been challenges and financial struggles.  I could tell story after story of miraculous provision.  I could also tell of all the times I needlessly stressed myself out because of my thoughts and false beliefs.  But God in His mercy gently leads those with young, and that has been me for 29 years and counting.
I’m fifty-two years old and I’ve been around the block a few times.  I realize that people’s backgrounds and circumstances shape their experiences and choices on having children.  I’m just sharing perspective from my own experience:
No matter how many children we had, no matter how close together and how difficult the circumstances, we weren’t sorry we had them.  I might have been really scared thinking about having more or being pregnant, but I didn’t regret that baby once it was in my arms. Ever.
So far we’ve contributed six upstanding citizens.  That’s a lot of tax dollars, folks.  We have a public school teacher who was Teacher of the Year at her school last year (now a stay at home mommy), director of a state university student ministry, program director for a YMCA after-school program, college ministry intern, photographer/musician (now a stay at home mommy) and a law enforcement officer. Six to go.
Every one of our children are persons.  Individuals.  Not a herd.  We love each one of them just as much as parents love their only child.
Our large family life is not wild and dirty and chaotic, contrary to popular belief.  I’m not saying there aren’t large families out there with that kind of life.  There are small families out there with that kind of life, too.  We’re actually fairly quiet, have a cleaner house than lots of people with no children, and have a lot of fun together.  It’s a wonderful life.  That’s not to say that it doesn’t get a little crazy sometimes: 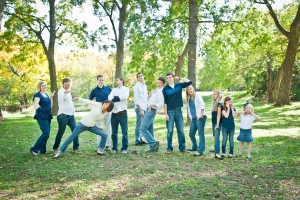 I didn’t go to bed one night and wake up with twelve children.  I had them one at a time so I grew as a mother and a person.  It truly doesn’t seem like we have that many.  Well, except when all twenty-one are home.  And the numbers are only going to get bigger.
Children are adults most of their lives.  Little boys grow up to be men: 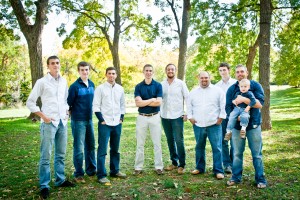 Little girls grow up to be women: 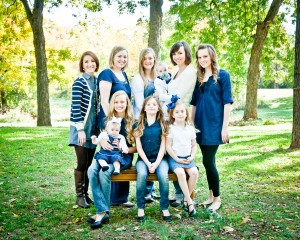 So there’s our story.  We’re not members of any church denomination that is known for large families.  Our large family is the result of a very personal spiritual experience (and of course other very personal experiences). 🙂
We’re extremely grateful to have six children still at home.  Another one leaves the nest for college this summer.  Eventually we will have no children at home but I imagine it will be pretty rare to be home alone.
The best of times, the worst of times—that describes anybody’s family life.  But let me say it for the record:  No regrets on having twelve children.
Please leave a comment below.