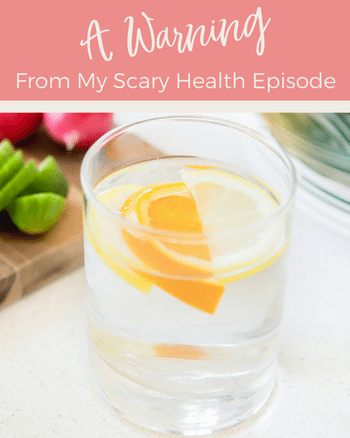 Visiting the doctor’s office is pretty low on most people’s mental list of fun things to do. If you’re like me, you tend to avoid going to the doctor unless absolutely necessary. There’s nothing wrong with that tendency, but it can sometimes be a challenge to know whether avoidance is helpful or hurtful. In fact, it may only be evident in hindsight. I’m not here to advocate either approach, just to share a recent experience that made me glad that I decided to make an appointment at the clinic.

It started after returning home on an 8-hour flight from Maui. I don’t sleep on planes, so it ended up that I was awake for more than 24 hours. That can affect anyone, so it wasn’t a concern when I started having weird episodes of tingling all over and having a “head rush,” feeling weak and having odd thoughts. It happened several times a day for a couple of days but then stopped and I pretty much forgot about it, chalking it up to lack of sleep, stress, and tired adrenals.

About three weeks passed, during which we had several major life events: an unexpected death in the family and the subsequent funeral, a dozen houseguests for more than a week, a wedding rehearsal dinner for 75 in our backyard, a son’s wedding, another son leaving for school overseas, and then another extended trip, this time to Florida.

A few days after returning from the second trip, the episodes began again only this time they were more frequent. When they occurred six times in one day, I made an appointment with our family doctor. The odd spells were disconcerting and even scary. My heart pounded, I felt weak and strange. It didn’t matter if I was sitting, lying down or driving, episodes happened and I began to feel like I was constantly on the edge of the next one.

The morning of the appointment arrived. I had an episode before the appointment, making me glad I was going in. After an examination, several diagnostic tests, an EKG and a 3-part blood pressure check, this was the diagnosis: moderate dehydration!

In looking back I realized that with travel, business events, two long days at Disney World, and a long flight home, I had gotten completely out of a routine and had not been drinking fluids. Upon arriving home, things were busy with unpacking and getting life squared away. I even remembered being thirsty and not taking time to drink water!

As you can imagine, I was both relieved and embarrassed. And wiser, for sure. I had no idea that dehydration could cause such a thing. I started drinking water and the episodes stopped, although the vague feeling still lingers so I’m not quite fully hydrated yet (the doctor appointment was only yesterday).

I’m sharing this story for education….and as a warning. Dehydration is no joke. One of our sons was hospitalized for three days with it after a stomach virus when he was two years old. Even mild dehydration can cause all manner of symptoms, from headaches to chills to foggy thinking. Moderate dehydration can progress to muscle cramps (which I also had) and tingling hands and feet (mine was whole-body tingling, and it was unpleasant and scary).

Sometimes in the busyness of life we forget the simplest of self-care and good health practices….like drinking water. You can bet that I have a new appreciation for good water, and don’t even mind the frequent bathroom visits. This experience was a wake-up call for me to pay better attention to my body’s signals and NOT put off meeting my body’s needs. Maybe someday this warning from my scary health episode will trigger a memory if you or a loved one has similar symptoms. And let’s have a healthy new respect for that common advice to “Drink plenty of water!”

UPDATE: After nearly a year of continued episodes, including unexpectedly fainting in the shower and bruising from head to toe, numerous tests revealed that I have neurocardiogenic syncope. It’s basically a miscommunication between the brain and some functions of the body, including blood pressure. It is related to the vagus nerve and my guess is that this nerve was inflamed or compressed due to spinal surgery. Stress and–you guessed it–dehydration can trigger episodes. Treatment is more water, more salt, weekly electrolyte drinks and no caffeine, as I hope to avoid medication. At this writing I haven’t had an episode in three months. The good news is that tests in search of answers show that my brain and heart are perfectly fine!